Home > Books > Honk If You Hate Me 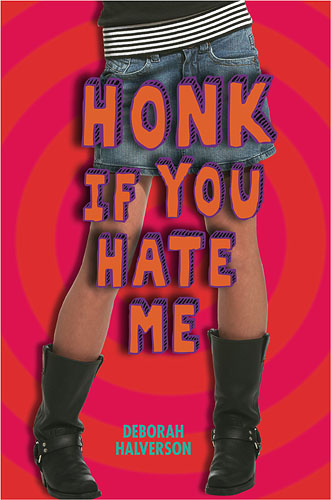 Honk If You Hate Me

Everyone hates Monalisa Kent. After all, she torched the futon factory—her town’s heart, soul, and bread-and-butter. So what if she was just six at the time? The good citizens of Muessa Junction don’t forgive and forget. It’s now the tenth anniversary of the blaze. The bitter town has been resurrected through the divine intervention of the fast food industry, but there’s no absolution for Mona—Junctioners hate the sorry sight of her. And Mona doesn’t like them either, thank you very much. At sixteen she’s dyed her hair blue, found her place at the local tattoo parlor, and memorizes bumper sticker sayings instead of dealing with people. But disappearing is never easy—especially with blue hair. In Mona’s efforts to retreat, she’s forgotten the oldest bumper sticker in the book: “Running from the past is like running from a dog . . . both can bite you in the butt.”

“Filled with delightfully quirky characters, the twists and turns of community legend, and a serious exploration of the role that identity plays in our lives.”—KLIATT

“Monalisa is a fresh and memorable character.”—Horn Book

“Monalisa Kent is my BFF!…I was shushed for laughing out loud on an airplane reading Honk.”—Stefanie Generao, reader

Take a look at “That Monalisa Kent Girl” (heck, everyone else is)…

Since neither of us owned a car, Burt and I had to hoof it to the Pink Cloud—me on my board, of course. We didn’t have far to go, actually. University or no, Muessa Junction wasn’t big, and my house was barely a mile from the center of it. Along the way, clumps of tall buildings poked from the ground like soggy fries in a supersize box. Lapped by hazy waves of heat, the buildings always looked wilted and sad.

Burt skipped ahead, making a game of kicking the crusty burger wrappers and greasy, balled-up paper bags that littered the sidewalk. He skipped blindly past the man in the red and yellow overalls without even noticing him. I didn’t miss the guy, though. He was lounging on the curb in the shade of a parked Wienerschnitzel delivery truck, leaning against the front passenger tire with a tall white soda cup in his hand and a hot dog balanced precariously on his bent knees. He lazily watched Burt dribble-kick a crumpled bag past. Then he spotted me. His face scrunched up in puzzlement, then slid into ugliness.

He flung a leg straight out across the sidewalk, blocking my path. His hot dog fell into the gutter as I skidded to a stop.

“No,” I said, stomping on the back of my skateboard, popping it up into my hand.

My stomach fluttered. It had been years since anyone openly confronted me like this. Usually after they ask me if I’m her, I just denied my existence and made a quick get-away. Junctioners tend to believe whatever you tell them, at least for a few minutes. Then they make up their mind and that is that, forever and ever, amen.

“I’m not who you’re talking about,” I said, averting eye contact so he wouldn’t think I was challenging him. I wondered what would happen if I tried to step over his leg. “Can I get by, please?”

Up ahead, Burt whooped in excitement and darted up the twisted old climbing tree in front of Burger King.

I eyed the guy on the ground. He had a pot belly, and his face was jowly. There’s no way he could scramble up and catch me if I managed to get past him. Maybe if I had a distraction . . .

“Look at this truck.” He pounded his elbow backward into the tire. “You think I like driving this beast all day? I don’t. I hate it. I’m an upholsterer, and a damn good one, not some flunky driver.”
I looked forward for Burt again. He was hanging upside-down from a branch, his knees folded over the top, the back of his head facing us. I’d get no help there.

“You know why I’m driving this truck? Do you?”

I didn’t answer. He didn’t really want an answer, I learned that a long time ago. No one wanted to hear from me, they just wanted me to stand there while they heaped more guilt on my already sagging shoulders. I had enough of that, thank you. What I needed was to get away. Slowly, I raised my skateboard up a few inches.

THIS is what I think of it! I shoved the skateboard down on the man’s shin as hard as I can. He screamed and pulled his leg to his chest, dropping his soda to clutch his shin. I bolted away, throwing my board to the ground in front of me, and then jumped on and push, push, pushed with my right leg as fast as I could.

Burt dropped to the root-cracked dirt like a cat and raced after me.

Talking Book Trends with Fellow Book Folk
I had a great Sunday afternoon. Why? Because I spent it with authors and illustrators of...