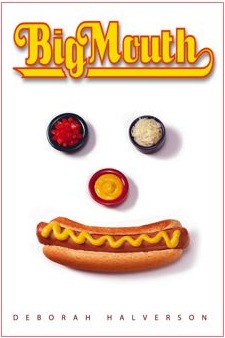 Meet the Next Hot Dog Eating Champ of the Universe

Fourteen-year-old Shermie Thuff has big plans—to win the Nathan’s Famous Fourth of July Hot Dog Eating Championship and be the fastest, richest, most famous competitive eater in the world. The hitch? The current hot dog eating record is 53-3/4 hot dogs and buns in 12 minutes. Shermie’s personal best? Ten. Clearly, he has some training to do.

Jaw strength drills, stomach expansion sessions, eating technique experiments—Shermie is obsessed with increasing his eating capacity. But can he stay in his zone when the whole world seems out to knock him off his game? Just when he starts to crack under the pressure, he gets his biggest shake-up: He learns that the 53-3/4 hot dog champ is an itty-bitty, 130-pound guy.

More determined than ever, Shermie vows to lose his restrictive Fat Belt the only way he knows how—with the help of his wrestling friend Gardo, a weight-cutting fanatic hell-bent on turning Big Shermie into a lean, mean, eating machine.

“In this cautionary tale about food-obsessed boys with eating disorders, Halverson uses humor and a light touch to explore a serious, little-discussed issue.”—The Horn Book Guide

You mean, the road to glory is uphill?

Everything looked better in morning sunlight. Or at least it was supposed to. This morning, I wasn’t so sure about that. The sun was only just rising, and Gardo had me on my porch at the buttcrack of dawn on a Sunday morning in shorts, thermal long johns, pants, sweats, snow pants, undershirt, T-shirt, sweater, scarf, ski cap, hoodie (with my hood up!), gloves, and plastic wrap around my stomach and thighs. The garden thermometer next to the porch said 79 degrees. I swear, Gardo had flipped.

But he was the coach, and what the coach says goes. Which, in this case, was me: I was going for the very first jog of my life.

Though it was early and I was bundled up like it was the Arctic winter, I was actually feeling okay about the upcoming jog. The relief of last night’s reversal of fortune was huge, so I wasn’t suffering any after effects from my hot dog capacity training session. Puking will do that for a guy.

“Ready?” Gardo asked. He was alternating between jumping jacks and jogging in place.

I was done rolling my shoulders and squatting, so, yeah, I was ready. “Now or never. Let’s pound the pavement, Coach.”

We took off at a gallop. The sun was rising in front of us, and the moon was falling behind. There was a slight crispness in the breeze that brushed my cheeks. My heart was pump, pump, pumping the blood through my body, and my legs muscles were stretching and getting juiced by the workout. Already, I could picture myself racing up the steps of the library at Palm and 13th, Rocky-style. I got the eye of the tiger, baby.

The first block was all downhill. It wasn’t steep, just a slight decline, but it was nice to have gravity working in my favor for the opening strides. I was feeling good, loose and lean. This jogging stuff wasn’t so bad.

“You want to speed it up there, Seabiscuit? My granny walks faster than that. Move it, move it!”

“Much better,” Gardo said. “Granny would have to be in her wheelchair now to catch you.”

I flipped him the bird. I would’ve told him to stuff it, but since I couldn’t breathe, I couldn’t talk. The plastic wrap around my belly started slip-sliding with sweat, and wet beads dripped down my lower back, under the plastic, feeling like an army of ants. My left calf twitched threateningly.

Gardo consulted the pedometer clipped to his waistband. “.3 miles down, 1.7 to go. C’mon, Shermie, pick up those knees, find your rhythm.”

A beat-up truck zoomed by, kicking up a cloud of dust. A beer bottle flew out the passenger window and exploded on the asphalt. Glass bounced off my shin.Jeez! If I hadn’t had on twenty layers of clothing, that shard might’ve sliced an artery. What a lovely way to start a Sunday morning. Whose brilliant idea was this jog?

“When we’re done,” Gardo said, dropping back next to me again, “we’ll have some pickles and a refreshing Gardo Glass of agua.” He wasn’t even breathing hard. “How does that sound?”

“Lovely,” I got out between breaths. Did Gardo know I was scheduled for water training today? I wracked my brain, but I couldn’t remember telling him. He was so hard-line on the Gardo Glasses, he might nix that part of my training. Well, I just wouldn’t tell him, that was all. I couldn’t risk it. Anyway, what was a little water in my belly going to hurt him? He’d let me have hot dogs last night because they were part of my training, and water expansion was just as vital. I had a graph from Lucy to prove it.

The miserable army of sweat ants had now spread from my back to my front, and the skin under the plastic wrap around my belly and thighs was stinging and hot, like when a too-tight shoe rubbed my heel. My head might as well have been in an oven instead of that ski hat and hood. No heat was escaping through my head today. Making things even rosier, the downhill slope was leveling out, so I was losing gravity as a running partner. People do this for fun?

Gardo dropped back next to me again. “How you doing, Shermie? You’re looking kind of tired.”

Then why the heck are you asking? “Fine.” I didn’t want him thinking I was a puss.

We jogged a few more feet.

“There’s nothing wrong with walking. My mom walks every day.”

He might as well have told me to start carrying a purse. “She’s a girl.”

“True.” A few more feet, then, “She says walking is better for you than jogging. Less pounding on the knees and spine, same weight burn. But you have to walk fast enough. It just takes more time, that’s all.”

“Can’t. Coach Hunt would have a cow.” He pulled ahead again, leaving me to my misery.

I wished I could walk. Especially if it was just the same or better than jogging. Jogging sucked. But walking was for girls, and that was just the way of it. Rocky didn’t walk. Hulk Hogan probably didn’t walk. They were champions, and I was going to be a champion, too. So Thuff Enuff wouldn’t walk. Period.

I tucked my head down and pumped my arms harder. My heart pounded in my ears and my breath came in gasps.

“C’mon, Shermie, one foot in front of the other, same as on the downhill. You can do it! You just have to think you can.”

Who was I fooling? I couldn’t jog up this hill. I’d die before I got halfway. I was just sorry Gardo would witness my Walk of Shame.

I slowed down to a walk and—

“Ow!” I collapsed to the sidewalk, clutching my left calf, the plastic digging into my belly flesh.

“What? What happened?” Gardo stooped over me helplessly. “Are you okay?”

“Calf!” I was wincing hard, barely holding back tears. The muscle was locked so tight that my foot flexed backward, my toes trying to curl under, even inside my shoes. It couldn’t have hurt worse if I’d squeezed it in a vice.

Then it locked down even harder.

“Rub it, Shermie, rub it.” Gardo dropped to his knees and started kneading my calf.

“Ow! Stop!” I shoved his hands away and rubbed it myself—furiously, with both hands. Stupid Gardo for making me jog. It’s my first time ever, we should’ve walked. Walking’s just as good or better than jogging, his own mom said so. Some friend!

He was right about the rubbing, though. It was helping my cramp loosen up. As lame as I felt doing it, I kept at it, all the while willing my aching, sweaty, wheezing, pathetic body to relax. But it was slow in cooperating. At least I was able to stop crying. My breath was still gaspy, but it was settling down as the cramp faded, and my pounding heart was slowing to a solid pump, pump again. The plastic wrap slid as I shifted around

Gardo still kneeled next to me. “Any better?”

“Good. That’s the best thing.” He sat back on his heels. “I had a calf cramp once. It hurt worse than when I broke my arm.”

“Thanks for sharing that.”

He patted me on the back.