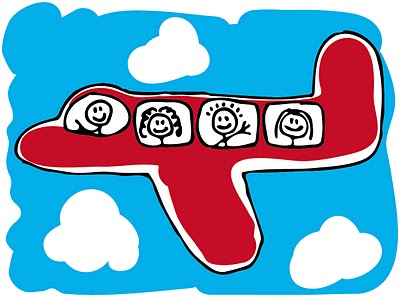 I spent Saturday morning and afternoon talking to fifty writers about children’s books at SCBWI’s Cottonwood Revision Intensive Workshop. I spent Saturday night sitting with 100 children in a 737. As far as I was concerned, it was a lovely day all around.

One gentleman did not share my opinion of the plane situation. When I arrived at my Southwest gate to find that several classes of San Diego 4th graders were flying home after touring the California state capitol, I laughed and said, “Should be about the same as sitting in my own living room.” When that gentleman arrived at our gate, he blinked rapidly, pasted an odd smile on his face, and said, “They’d better placate me with more alcohol than I can consume.” He said this loudly. Many times. I made a few attempts to get him to lighten up but then gave up, he was intent on having a bad flight.

The fourth graders and their chaperones boarded the plane first, filling the plane from the back forward. When my turn came, I seated myself in an aisle seat in the first six rows, which were reserved for the few non-field-trip-related adults, and so had a great view of Mr. Grumpy’s face when he boarded the plane last and discovered that those first six rows were now full. He would have to sit in the back of the plane in an emergency exit row among the kids.

Now, I know not everyone on the planet is a child-lover. And I know that we all have bad days now and then and desperately need to unwind. Perhaps that gentleman fell into one or both categories on Saturday night. Still, I couldn’t help but smile a little as the man made his way down that skinny aisle, squeezing past one excited, jabbering fourth grader after another, and plunked himself down into that emergency row seat. He seemed to realize that protesting was futile and that complaining anymore was futile. He’d come to terms with his fate. Slowly, with a full sweep of his long arm, he reached up above his head and pressed the red button on the panel above. Apparently, he did not think the alcohol would be futile.

Too bad for him, the attendants had 100 soda-drinking fourth graders to serve first.