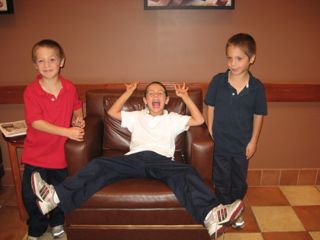 This weekend I squeezed in some writing at the ultra busy Borders Cafe. At one point, in dire need of a laptop charge, I spotted an open armchair next to an outlet and rushed over to plug in. The writer in the armchair next to me leaped up and rushed to my vacated table. Another writer at another table saw his armchair open up and rushed there to sit and plug into the outlet. A fourth writer vacated the armchair on the other side of me to commandeer that second vacated table.

Oddly, no one said a word. It was focused and quick, and we all had earbuds in and went right back to typing.

Writers at work: Do not disturb.