Now SHUT UP AND DO IT! is stuck in my head.

Oddly, or perhaps not, if you really know me, that kind of shouting and challenging works with me. That’s how I became a published author. I have a little voice in my head that shouts things like this at me and so when it came to writing I just shut up and did it. I told no one what I was doing, not even my husband, although he knew, of course, because he knows me better than I know myself, and just wrote my first novel. In my mind, it was as simple as that. I still remember the silent, blinking surprise of my fellow Harcourt editors when it was announced at a meeting that I’d just sold my debut novel in a 2-book deal (to another house, by the way; best to keep these things separate). None of them had any clue I was even vaguely interested in writing something of my own. But that’s me, I tend to do the shut-up and do it thing. I see no use in talking about something but never doing it. To be honest, I find it annoying. If you’re going to tell me about it, you’d better be doing it. I don’t much care about the results, oh, I care for your sake, yes, it’s the doing that I respect. The only thing I love more than hard work is a hard worker. Hard workers always inspire me, regardless of their ultimate success in the endeavor.

Tonight, with my ears still ringing from my spin class, I’m thinking of three people who are DOers, who didn’t just talk about a dream, but who worked for it . . . and for them success came. I find these people immensely inspiring, and I thought you might, too:

Kathi Appelt. Kathi had been writing picture books for years, successfully, with a slew of awards and well-respected books to her name. I edited Kathi’s picture book Piggies in a Polka during my days in Harcourt editorial, and my experience with her was nothing short of wonderful. Despite her success with picture books, though, Kathi wanted something else. She wanted to write a full novel. Alas, it eluded her. It wasn’t for want of trying, she’d tried and tried, but she couldn’t figure out how to pull it off.  Something was missing from each novel she started, and she abandoned every one. Most people would be content with her picture book success. But Kathi is not most people. Kathi had a dream to write a novel, and she was going to do it. Finally, after studying and asking other writers and reading all she could on the novel format, she realized that the thing eluding her was tension. She needed to raise the stakes for her characters.

“That’s it,” she thought. “Raise stakes, that’s what I’ll do.” And that’s what she did. That next attempt at a novel became her debut novel, and went on to become a National Book Award Finalist. The Underneath, it’s called. I just finished reading it today, and it is brilliant. Lyrical, emotional, and absolutely vibrating with tension. Kathi did what she pledged to do, she raised the stakes and tightened the tension, and ended up writing one of the most amazing novels I’ve read in years. All because she insisted on writing it. She wanted and so she did. My spin instructor would be as inspired by her as I am.

Noha Waibsnaider. Not all my friends are writers. Some are snack food moguls. Okay, one is a snack food mogul. Her name is Noha. I met her years ago, when she was working in the managing editorial department for Harcourt Children’s Books. I imagine she snacked on fruits at her desk, but in no other way was fruit a significant part of her mindset. Now she thinks about it every waking moment. You see, Noha got frustrated with the state of store snack shelves, which are full of processed potato chips, corn syrup-filled candy, and energy bars made with too many mysterious ingredients. But instead of bemoaning that, Noha decided to DO something about it, she created a fruit snack that isn’t processed and engineered beyond recognition and now sells it under the banner of

Peeled Snacks, a successful healthy snack company that she founded and which is currently featured in Starbucks stores nationwide. I was so raucously proud when I turned around in my Starbucks one day a few months ago and saw her Peeled Snacks in a huge display in the center of the room. “YES!” I squealed as I pumped my fist in the air. She did it! I can’t imagine what the other customers thought when I started snapping photos of the display with my phone. Honestly, I wouldn’t know how to go about creating a snack, getting it packaged and shipped and promoted and what all. Noha didn’t, either. But she learned, and then she combined that 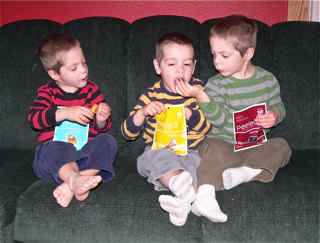 knowledge with her post-Harcourt career in advertising and Peeled Snacks was the result. I admire the daylights out of Noha. Next time you’re in Starbucks (or Whole Foods, another stalking ground of mine), try a bag of Peeled Snacks. My boys love it. Plus, Noha’s imbued the line of snacks with her spunky personality: the flavors include Much-ado-about-Mango, Banan-a-peel, Apricot-a-lot, and Cherry-go-round. That’s my Noha, a spunky go-getter who has turned SHUT UP AND DO IT into a way of life.

Jeff Hirsch. My friend Jeff started out as a playwright. But he had a hankering to see his name on a book cover. Instead of talking about how much he wanted to write a book some day, though, he actually wrote a book. Only, that manuscript didn’t fly. So he wrote another one. That one had some air under its wings, so he worked on it some more, and some more, and some more. Over the next couple of years, Jeff put in his dues, honed his craft, and eventually gave that manuscript full flight, landing a 2-book deal with Scholastic that will put his debut novel, The Long Walk Home, in bookstores in 2011. Jeff exemplifies the passion and commitment I see every day in writers who don’t just talk about writing a book someday but who hunker down with their laptops and their ideas and DO it. I was privileged to weigh in editorially on an early version of The Long Walk Home, but that final manuscript is all Jeff’s. And it blows me away. Yep, it’s that good. I’m so proud of Jeff. He didn’t just talk about seeing his name on a book one day, he made it happen.

I am privileged to know many amazing people who live the credo SHUT UP AND DO IT. Some have yet to realize their final results, but regardless of how their endeavors end, I am completely inspired by their efforts. They get the negative thoughts just like the rest of us, but instead of giving in to those thoughts, they push ’em away and replace them with YES, I can. YES, I will. YES! YES!! YES!!! It’s enough to inspire me to charge my bike up to the top of the hugest hill I can find . . .

I don’t even care that my bike is a stationary one.