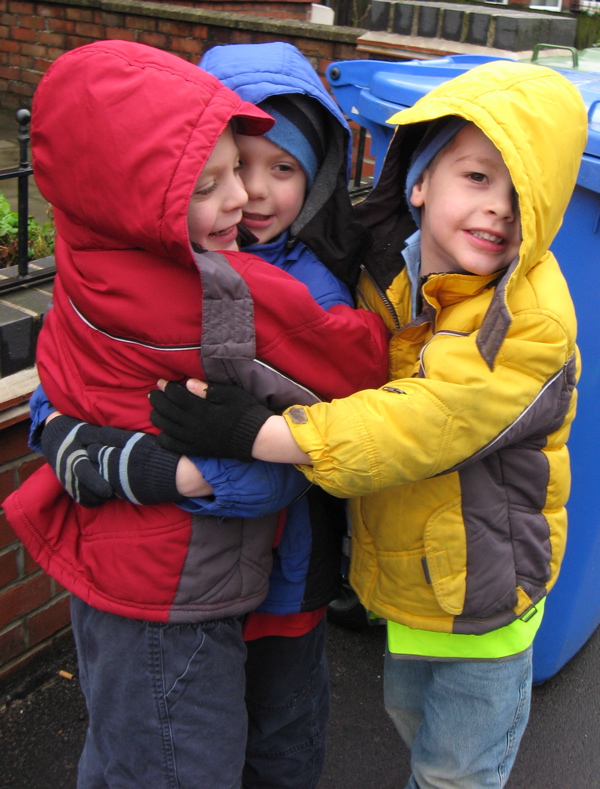 I’m sitting in a room with three four-year-olds who are playing peacefully with each other. I’ve got misbehaving grownups on my mind.

Kanye West, for one. Two nights ago he stormed onto the stage at the internationally televised MTV awards, ripped the microphone from a nineteen-year-old’s hand during her acceptance speech, and hollered that the better music video was Beyonce’s. That’s the second time West has jumped on stage to trash someone’s moment. He also hijacked the microphone from a European group called Justice and Simian at the MTV Europe Music Awards in 2006, that time filling his much longer tirade with expletives.

Joe Wilson, for another. Last week he shouted “You lie!” during the President’s nationally televised speech. Wilson says he apologized to the President after leaders in Wilson’s own party told him to. I’m not sure if he’s saying this to imply that he wouldn’t have apologized on his own or not. What really caught my ear was when he defended his outburst as a “town hall moment.”

A town hall moment? Now that’s an interesting defense. Are we supposed to say, “Ah, well, never mind, then. You were totally right to express yourself in that way at that moment in that venue then. You had a town hall moment. Now I understand. Pardon me for finding you out of order. Go grab a Fresca and have a seat, the next speaker will be on in two minutes. We want your whistle wet in case another town hall moment presents itself.” A town hall moment… When did it become not only acceptable but model behavior for adults to shout at each other, cuss each other out, grab and shove and hit each other? When that happens in a preschool classroom, it gets you time outs or worse.

As both of these men demonstrate, disrespectful, violent, and vitriolic public behavior is becoming a norm in all public interactions, and I have a theory about it. Have you ever read the articles in an online news outlet, like www.cnn.com? At the bottom of the news articles there’s always comments section, wherein readers can post their reactions, opinions, whatever. Every once in a while I stab myself in the eye by reading the comments. They are mean. Not poorly stated or tactlessly worded, but mean. Downright vicious. Name calling. Insulting. Denigrating. Cruel. It shocks me. There’s no pretense of debate or rebuttal, the entries are overwhelmingly formed like “X is a blankity blank and all you blankity blanks who keep commenting that he isn’t are bigger blankity blank blanks. Blank you!” You can see the same degree of viciousness and blind attack in many blog comments, in discussion groups, even in product reviews on store websites, before they are removed. I believe the anonymous quality of online interaction lets us drop the civility that is required of us in a face-to-face interaction. You would rarely, if ever, say that to a total stranger whom you just walked up to in the mall. Or rather, you wouldn’t in the past. We’re now getting used to spouting vitriol with abandon, with no consequences, and with none of the self-censorship that comes with seeing the pain our words can inflict. It’s become the norm for us to talk to people in that manner online, and now that we’ve been doing it without censorship for several years, it’s spilling over into how we behave face-to-face. We are jumping onto stages and ripping the microphone from people’s hands and trashing them right to their faces. In front of millions of viewers, no less.

I’m all for debate and always have been, regardless of the party affiliation of the man in the Oval Office. That’s what allows our unique country to progress. But Wilson’s and the recent town hall meeting behavior is not debate, that’s name calling and bullying. There has always been angry political protest, and there always will be, but in the recent town hall meeting behavior we have jumped the violence and cruelty to a new level, encompassing greater numbers in demographics never before associated with such antics—including top level politicians during a president’s national address, as Wilson’s “I had a town hall moment” defense acknowledges. This behavior is different. And I wouldn’t accept it from my four-year-olds.

Name calling, teasing, shoving, and interrupting a brother to shout something mean or rude in his face is not allowed. I recently banned the word ‘head’, as innocuous as that is, because it was being used in name calling. I don’t let my sons watch TV because they will see cute cartoon characters calling each other ‘stupid’ or making fun of another character. Children model the behavior they see, even if that behavior is being shown so that we can teach that it’s wrong. Apparently I now have to keep my sons from watching a president’s speech from the House floor. Who knows when a grownup in the audience might have “a town hall moment”? We adults are supposed to be teaching children how to behave, but instead we’re behaving like children. Mean children. Brats.

Name calling, bullying, disrespecting, verbal and physical attacking. No, I definitely wouldn’t accept such behavior from my four-year-olds. Maybe its time we grownups put ourselves in time out to think about our behavior.